The national socialistic glorification of war resulted in a militarized society during the period the national socialists were in power. This militarization of society resulted in an excessive interest in military subjects including a growing interest in firearms. During the early forties several manuals were published about the firearms used in the armed forces. Mostly these manuals covered multiple fire arms. The chapter or paragraph that described the MP38 and MP40 were direct copies or strongly influenced by the military manuals. In most of the cases the authors simply rewrote the text. Perhaps to prevent copyright infringements. A few general remarks can be made about these “Civilian” manuals:

• All manuals stated the publisher on the cover since there was no official military initiator.
• Most manuals have the price in Reichsmark on the cover.
• The civilian manuals do not use exclusively the “Faktur” font. A modern font is used in most publications.
• Some manuals contain an order list in the back. If the reader was enthusiastic about his manual he could easily order more by making use of this list.
• According to unconfirmed sources the commercial manuals were also purchased by the armed forced to distribute to the soldiers. In the light of the scarcity of military manuals this seems plausible. 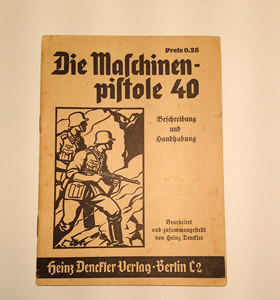 The manual „Die Maschinenpistole 40 – Beschreibung und Handhabung“(Machine pistol 40 – description and maintenance) from Heinz Denckler Verlag was the most common „civilian“ manual. Heinz Denckler Verlag was a publisher that published many books and manuals about military training and weapons. Many reprints were published of this manual in a variety of colors. Pink, green, red and beige versions have been reported. No official print date is known but given that the military pamphlet the „Merkblatt für die behandlung der Machinepistolen zum verhindern von Hemmungen“ was included it is safe to assume that this manual and its reprints were published after November 15th 1941. The Merkblatt series of manuals were clearly used as textual basis for this Heinz Denckler manual. Most of the lines are slightly rewritten in a more understandable way. Some paragraphs have been omitted but in general it is the same. Contrary to the “Merkblatt” series the Heinz Denckler manual has only on page with pictures. The first picture shows a mp40 from the left side and the second picture shows a cross section picture of the MP40. These pictures are on the last page. Attached to the picture page is the order page. No differences between the reprints have been reported apart from the order list that expanded over time. Two main printers can be identified on the last page:

1) Soladruck Steinkopf & Sohn, Berlin SO 16. Manuals from this printer are mostly encountered.
2) "Grafica" Druckanstalt in Pilzen 807. Rarely encountered. The printing quality of these booklets is more refined also the size of the booklet is slightly larger. 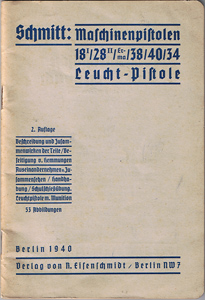 The Schmitt: Maschinenpistole 18I/28II/Erma/38/40/34 Leucht Pistole commercial manual was part of a set of 2 manuals covering most of the firearms used by the armed forces. The manual covered the MP18I/28II, the mp34ö, the Erma Emp, the MP38 and MP40. The text describing the MP38 and MP40 was again based on the “Merkblatt” series. Only the paragraph referring to the description of the weapon and the handling together with the pictures were included in this manual. 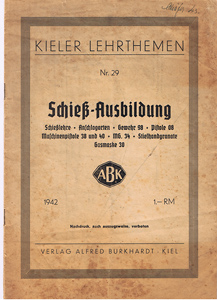 The "Kieler lehrthemen – schieβausbildung 29 – Verlag Alfred Burkhardt, Kiel (The Kieler educational themes – shooting training, part 29) was a whole range of study material offered to the military enthusiastic. It described the theory of ballistics, the ways to hold weapons when firing. The G98, the Luger Pistole 08, the MP38 and MP40, the MG34, the stickgrenade and the Gasmask 30. Again the text structure is almost similar to the “Merkblatt” series. No pictures are used in the manual. Apart from the printed version there are typed out versions reported.

Reibert- Der dienstunterricht im Heere (Teaching of the armed forces) This is the well known semi-military handbook for the soldier. It could be voluntary purchased by the soldier. The text and pictures used in this manual are from the “Merkblatt” series of manuals. Several versions were published for different parts of the German Army. (no photo available) 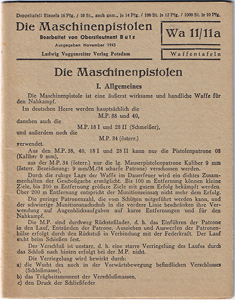 The Wa 11/11a weapons table was in fact not a real manual. It was a small fold out card that depicted the most commonly used sub-machineguns of the armed forces. It covered the MP38 and MP40, the MP18I/MP28 II and the MP34ö. The description of the weapons had to be aligned since the different sub-machineguns were described in a table next to each other.