Heinrich Vollmer was born in Württemberger town Biberach am Riss in 1885 yer.  Since very early age he was of an entrepreneurial nature, in 1920 he established his first company Vollmer Werke Maschinenfabrik, already in 1909 year. The company produced wood cutting tools, but since very early he was interested also in weapons. His first military invention – a bullet proof shirt in form of a mail clad armor (in principle a modification of medieval armor) he offered to Würtemberger ministry of war in 1912. When tested, the shirt failed. In 1914 he was drafted to army but in a short time he, as an entrepreneur and company owner, was freed of service and his company started to participate on weapons production for Germen Imperial Army. The company produced only a minor parts of weapons as one of subcontractors within a mosaic production system, specifically muzzle protectors for Mauser  98 rifles and small parts for MG 08 machineguns (licensed Maxims). Maybe it was this production that gave Vollmer’s creativity new impetus. In August 1918 he was granted a new patent concerning a beltless feeding device for MG 08 and TuF MG machine guns. The device was functional and raised a reasonable interest but the war ended before it could have been fully tested and adopted (if successful).  At the war’s end, Vollmer get familiar also with a weapon of an entirely new kind – with submachine gun M.P. 18,I. 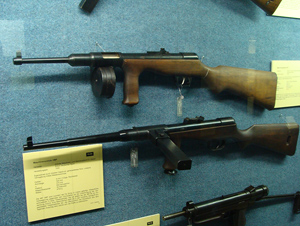 Design of fully automatic weapons attracted him so much that in 1925, aside of his wood cutting tools, he designed his own kind of a submachine gun VMP 1925. The gun he offered to German army which after trials recommended further development. The development resulted in the submachine gun VMP1930, which utilized his patented telescopic guide of the recoil (main) spring. He produced and sold small amounts of this submachine gun but it was not enough to keep this kind of enterprise economically viable. Therefore he sold on October 20th of 1931 entire design including the patent rights to the Erfurter Maschinenfabrik (Erma) of Berthold Geipel. Erma the weapon produced and sold under its own mark EMP further on.

Already in 1916 Vollmer also began working on a design of a light machine gun. The design took time, resulted in a limited amount of prototypes but none reached a full development stadium. At the end the weapon was known as a MG Vollmer, later also as VMG 1927. In 1927 Vollmer also obtained a patent covering the breech mechanism of the weapon.  Even later on, Vollmer offered his design in cooperation with Mauser Werke as a MV31 (MauserVollmer 1931) to German ordnance board - Inspektion für Waffen und Gerät - IWG. This machine gun was of a quite simple design, it had a quickly changeable barrel, drum magazine and German armed forces tested it quite thoroughly. The MV31 was not a bad weapon at all but at the end failed to be adopted.

Parallel to the development of the machine gun Vollmer started to work also on a design of a automatic rifle in full power rifle caliber 8x57, which he intended to offer to German armed forces as a main weapon of German infantry. Also for this weapon he obtained a patent coverage. The weapon marked SG 29 at the end failed to be adopted, but Vollmer was addressed by company Gustav Wenschow to modify his weapon for the Genschow’s newly developed cartridge of a medium ballistic performance. Vollmer agreed and designed a carbine M 35. This weapon – a direct predecessor of a new firearms category – assault rifle – Vollmer further developed and modified on remarks and results stemming from intensive testing of M 35 by Waffenamt. No matter of very good results, the M 35 at the end failed to be adopted too. The reason of rejection was probably fact that the weapon was designed for a production by classic technology, based on milling and lathing. Such a technology was in strong contrast with requirement for mass usage of stamped and welded parts as was strongly proposed already in late pre-war requests of German Waffenamt as a way of increasing production rate of military weapons. 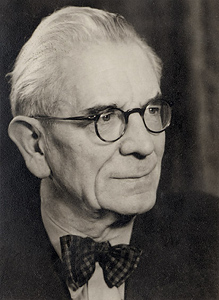 After beginning of the World War II Vollmer’s activity as a weapon designer has practically ceased. In his factory were produced small parts for MP 40 submachine guns, but as a weapon designer Vollmer stepped back. After the war Vollmer and his factory focused on production of sharpening equipment for the wood cutting tools. Heinrich Vollmer died in 1961, the company still exists.

In a contrast to public believe, Vollmer never was an employee of neither Erma nor C.G. Haenel companies. Some characteristics of his design can still be found in design of M.P. 38 and MP 40, but there they went through the licensed production of ERMA’s submachine gun EMP – gun based on Vollmer’s VMP 1930. Although none of designs was adopted for an armament in massive amount (except of EMP adopted by German Police and Waffen SS and France and Spain, were it was also licensed) in the interwar period of time Vollmer was of the leading German firearms designers. As such he was recognized, accepted and his contribution to German firearms design of his time can not be denied. 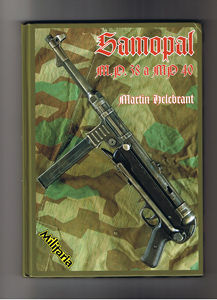