The whole design and development of the MP38 cannot be seen as a process on it's own as you can read in the introduction of this chapter. Many factors and infuenced the final design. Basically the design started in the early twenties with Vollmers VMP models. During the 1930's The Schmeisser brothers were granted a lot of patents that were used in the MP38. The use of the revolutionary design of the fold up stock and as a result of this new feature; the pistol grip, can, in the end mainly be credited to the descission of the commisioner's of the armored troops and fällschrimjäger within the Heeres Waffenamt (Army weapons office). It's clear that the initial intention of this new sub-machinegun lay in the use with these "modern" units and fitted in the new "Blitzkrieg" doctrine. It's often said that the Army showed no interest in submachineguns. This might be partly true because for one thing the general attitude toward rifles, carbines and submachineguns for military use was that a strong (wooden) stock was necessary. Not only as a shooting appliance but also as a bat in close combat situations. For instance it's known that Hugo Schmeisser was a proponent of the wooden stock on a sub-machinegun. This comes back in his MP41 design. After Hitler came to power in 1933 things changed dramatically in Germany. Also in the Army. Priority was given to revolutionary thoughts, tactics and designs as a preparation for Hitler's sinister plan's with Europe. 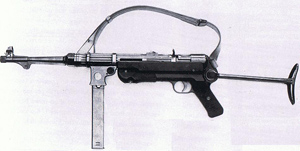 during the first few months of 1938 Erma was asked to develop a suitable sub-machinegun based on the study model; the Erma MP36. As said it was mainly the fällschrimjäger and armored troops who showed intrest. During this period Erma fabricated a few prototypes. One example is a version where the longitudinal grooves are over the whole lenght of the receiver (see picture). This pre-production MP38 is different from the production model in many ways. Apart from the longitudinal grooves, the trigger is formed differently. Also the shape of the barrel nut seems to be longer. The handgrip has a different angle and is fitted with wooden handgrips just like the MP36. I wonder if any of these pre-production models have survived the war and are in the hands of private collectors?

On the 7th of July 1938 the "Oberkommando des Heeres" announced in the "Heeresmitteilungen" on page nr. 13 that the trials with the MP38 had been finished and that it was officially introduced. Initial production started at Erma. Early MP38's were provided with the production code. "27". This number was the inheritance of the secret re-armement program of the early 1930's.

The MP38 has been produced by 2 main factories. These were: 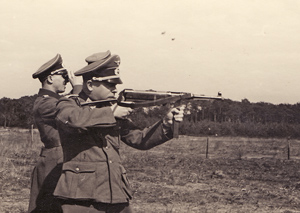 Erma started in 1938 and in 1940 Haenel followed Erma in producing the MP38. In 1938 roughly about a 1000 mp38's are estimated to be made. This is based on serial number investigation as described in "Propaganda Photo Series Volume 2". By the start of WW2 on the 1st of september 1939 the Wehrmacht had about 8,700 MP38's in it's inventory. In the last few months of 1939 another 5,700 were produced. So in total a production of 14,400 MP38's. Then 1940; I's stated everywhere that this year the vast majority of MP38's has been produced but is this really the case? Often the production year 1941 is forgotten. A total of 12,800 MP38's were produced or at least assembled in 1941. So why would there still be production of the MP38 while the MP40 already had gone into production. This is explained by a flooding that happened with one of the suppliers of Erma and Haenel. Because of this flooding the supplier could not deliver it's components. This halted the production of 12,800 MP38's. As said most sources talk about a 1940 production of about 24,000. I think production was similar to that of 1939. So about 14,000. It's this total or the total production must have been higher. If production really had been 24,000, the total production must have exceeded the total of 40,576 as mentioned in Frank Iannamico's "Blitzkrieg". Production in this scenario should have been more that 52,000. If you have more information regarding the productionnumbers of the MP38, please let me know. Also I would be very interested in the productionnumbers of each factory, Erma and Haenel. 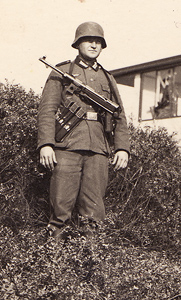 It's not clear to me if at this early stage (1938-1940) subcontractors were used already. I do know from one of the readers of this website that in he found a WaA623 stamped bold in a number matching MP38. This was however a AYF 41 stamped MP38. In this year Steyr was already heavily involved in the production of the MP40. It's not clear to me if National Krupp Registrier Kassen (code: CND) or Merz Werke (Code: COS) was already involved in production of parts. One subcontractor that for sure was involved is the "Vereinigte Isolatorenwerke A.G." (code: GBM) from Berlin-Pankow also known as "Viacowerke". They produced the Bakelite foregrip and handgrips for the MP38. The trade name they used for Bakelite was "Margolite". 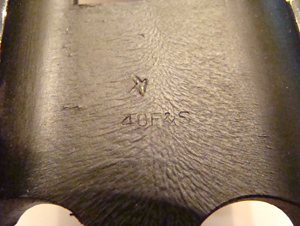 Another important subcontractor was Fichtel and Sachs from Schweinfurt. This company is marked in the secret code book with the codes "26" and "aso" however the code stamped on the inside of the MP38 handgrip was 40F&S (see picture on the left). Fichtel and Sachs had a lot of experience with aluminum moulding since they produced gearboxes for motorcycles and mopeds. Today this company still exiss under the name ZF Sachs AG.

The MP38 may be considered as one of the last sub-machineguns that was almost completely build with machined parts. It's a beautifully made gun and superiour in quality and finish to the MP40. The MP38 consist out of 3 main parts. These are the barrel and receiver section (1), the grip (2) and the telescope spring with the bolt (3). To look at every part in detail please check the . The receiver section is, contrary to the mp40, completely made of machined steel. In order to lighten the receiver the tube was provided with longitudinal grooves over the full length. Also the magazine receiver had a hole to lighten up the weapon. 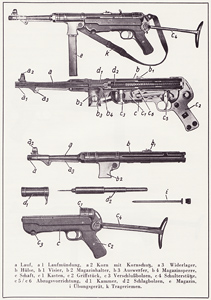 The grip section contains 3 main parts on itself. The aluminum handgrip, the partly machined iron trigger housing and the shoulder stock. The trigger housing also has been provided with lightening holes. This was not done with the later MP40. It's also a contructed housing and not a pressed. Just by the looks of it you can see that this housing must have cost a lot of energy to make. The third main part is the famous telescope spring and the bolt. The original "early" bolt was provided with a hook or spoon shaped retracting handle. The fact that this retracting handle could not be locked meant that the retracting handle and the attached bolt could unintended be pulled. When far enough pulled and released, a cartridge could be fired unintendently. Apparently many accidents happened between 1938 and mid 1942 because of this fault in the design. Different experimental safety's were tested but initially a cheap solution was cosen for. A simple leather strap was developped which retained the bolt in the forward position. Clearly this was not the right solution since on July the 25th 1942 an order was issued to replace the old retracting handle by a new one with a safety catch. All the mp38's and mp40's had to be changed before May the 20th, 1943. I'm still surprised to see that so many early MP38's and MP40's have survived this directive. Off course it can be that collectors are more interested in the early version and as a logical result there are more left of these. I hope that when the MP40 serial database on this website grows I get a better idea of the percentages. So please sent me your MP38/40/41 details on this!

The differences in MP38 parts are not as many as with the MP40 but still worth mentioning: 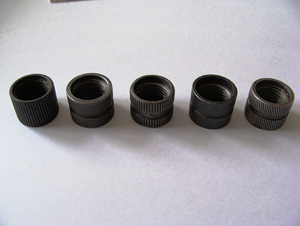 1) The muzzle nut (Nr.10 in the part list) comes with the MP38 in 2 versions. There is the original MP38 one without the groove in the center and there is the MP40 most comon one with the groove. This groove was made for the rubber protection cap. Initally they used a far to complex metal muzzle cap. Apart from the complexity it also frooze during extreme low temperatures. There are 3 other versions but I have never seen them on a MP38 which by the way does not mean it does not exist. I have never understood why there should be so many variety in these muzzle nuts.

2) The front sight guard (Nr. 16 in the part list) also come in 2 versions. The early one with the possibility to fit a metal muzzle cap and the later one without it. Both versions are seen on the MP38 and MP40. The MP41 only had the later one.

Furthermore I have not discovered any differences with the mp38. You could mention the receiver. There is the original without cut out and there is the one with the cut out. This was however never done in the initial production therefore I don't consider it to be a difference.