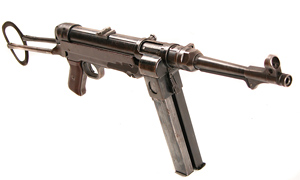 The MP40/I was listed in the official “Gerätliste” (equipment list) as “Gerätnummer 3004” (appliance number 3004). In many publications the MP40/I has been described as MP40/II which is INcorrect!

Since it was mentioned on the Gerätliste the MP40/I cannot be considered a proto-type weapon. Although production numbers were limited the weapon was accepted by the Heereswaffenamt and brought into operational service. It is believed that the feeding system MP40/I has been developed by Erma in 1942. This was a response to the request of the Wehrmacht to produce a weapon with a higher magazine capacity in order to counter the high capacity drum magazine of the Soviet PPsh41. 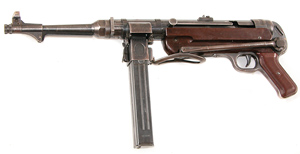 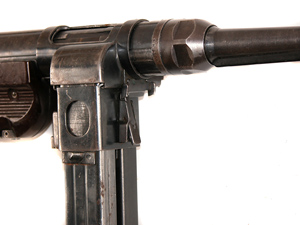 
A few differences to the regular mp40 can be noted: 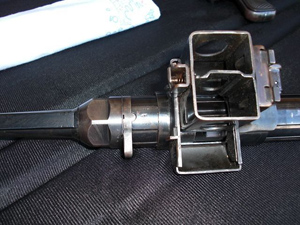 The first and least visible difference is the “cut-out” in the tube or upper receiver. With the regular MP40 there is only a square well for the magazine to enter the tube. The MP40/I has a well that is larger and almost cuts the tube in half (lengthwise). The bolt “floates” almost completely free in the tube. The result of this bigger well has quite an impact on the structural integrity of the tube and therefore the total weapon. So the changes that the weapon would break or bend were considerable.  In order to strengthen the tube, the top part of the magazine holder of the MP40/I, functions as part of the frame as well. On the different photos you can clearly see the steel plate is almost twice as thick as the steel plate of a regular MP40 (almost pré-war MP38 quality!). The main reason why this cut out is made so big is because of the side way movement of the holder of the magazines. 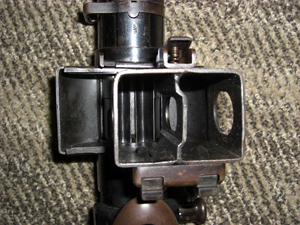 Another difference that can be noted is that on some of the MP40/1’s the shoulder blade of the folding stock seems to be shortened. The whole double magazine feeding system seems to be set back slightly more than the regular feeding system. In order for the folding stock to fold properly the shoulder blade had to be shortened a bit.

Also the ejector has been made shorter since the whole housing is shorter. One of the MP40/I’s even has the last two digits of the serial number on it.

1) The weight of the weapon
2) The tendency to break or bend due to the deep cut in the tube
3) Simplification of the arms program was the overall goal in order to increase production. The MP40/1 was the opposite of this.

Apparently the Wehrmacht still saw the advantages of such a high capacity weapon especially for static positions like bunkers or for armored vehicles. Erma continued developing the double magazine machine pistol. In 1944 a prototype was developed the EMP44 with a more or less similar feeding system but some extra features especially designed for bunker and armored vehicles.

At this moment I have identified 8 different MP40/I’s. Unfortunately some data is missing:

A few remarks to the MP40/I’s mentioned above: 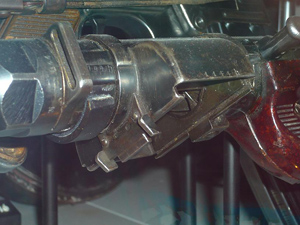 The ayf 43 1144h that is kept in the Imperial War museum in London is missing the lower part of the feeding system. This specimen also has a reinforced tube. Steel plates have been welded to the lower part of the tube. The fore grip is made of the red Bakelite which is commonly seen on 43 Erma and Steyr models.

Strangely the ayf 42 6081i has the connector for the hinged muzzle cap. Out of 570 MP’s in the database this is the only 1942 MP with this connector. This does not seem to be correct. I do not have information if the MP is number matching or repaired.

In my opinion the MP40/I has not been fabricated in a separate production run. It would not seem logical to have them assembled in two factories. Looking at the serial numbers of the MP40/I’s I suspect that think certain number of MP40’s were recalled and accustomed. Otherwise the production runs would have been quite substantial calculating production from serial numbers.  Although I must admit that it is hardly a coincidence that the “Steyr production” of the MP40/I all have the pistol grip without the rim.

According to www.forgottenweapons.com ;“Very few survived the war, although it seems likely that counterfeits have been made, as the guns command extremely inflated prices compared to normal MP40s, and the modification is comparatively easy to do (I have heard that a few dual-mag housings were brought over to the US from Czechoslovakia or Yugoslavia after the war, which would make it very easy to make one of these).”

Information is very scarce. If you can help me with additional information please let me know info@mp40.nl 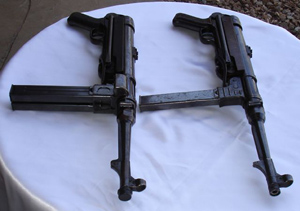 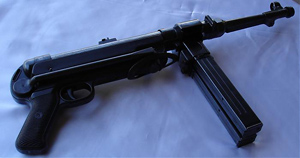