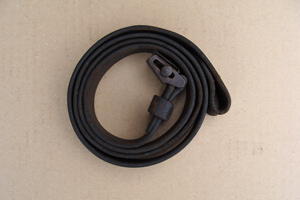 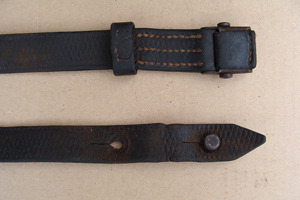 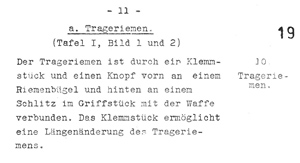 The carrying sling is held to the weapon at the front by a clamp and at the rear by a sling loop with knob through a slot in the grip. The clamp makes it possible to lengthen the carrying sling.
Exactly the same text is used in the succeeding D167/1 manual; “Maschinenpistole 40 Beschreibung, handhabungs- und Behandlungsanleitung”.
This official description in both manuals leaves no uncertainty on how to attach the carrying sling to the weapon although on some wartime pictures the sling is attached in two ways. A good example of this is the famous “Stalingrad” picture which features 2 NCO’s with MP40’s. Each carrying sling in the picture is differently connected to its MP40. Apart from this the carrying sling could also be attached to an 180 degrees turned sling loop. Officially the sling loop had to have the loop on the right side of the weapon. It was not authorized to have the sling loop on the left side. Although there are photo’s of that period that clearly show the sling loop on the left side. I have read on a forum that this was considered by German veterans as carrying the MP40 “partisan” style. 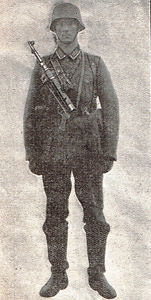 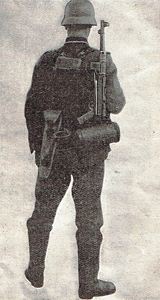 Picture from the original 1939 manual; “Merkblatt für die Ausbildung mit der Maschinenpistole 38 und 40” photo 5 page 15
[read more]
The official way to wear the MP40 with its carrying sling is depicted in the official manual, the “Merkblatt für die Ausbildung mit der Maschinenpistole 38 und 40” from the 4th of December 1939”. See scans to the left.
1) The M.P. hung over the right shoulder.
2) For a change the M.P. can also be hung in front of the body.
.
.
.
.
.
.
.
.
.
.
In the second print of the D167/2 (individual parts listing) from the 25th of September 1942 all seperate parts of the carrying sling are described and coded separately: 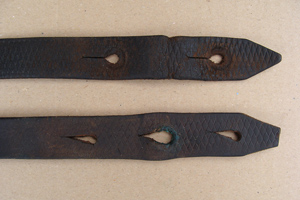 The main differences between the K98 sling and the MP38 and MP40 sling are:

1) The MP38 and MP40 sling is about 25 cm shorter than the K98 sling. The MP40 sling is 116 cm and the K98 sling measures 141 cm.
2) The K98 has three stamped holes for adjustment of the length. The MP40 sling has only two stamped holes. Many slings for the K98 have been adjusted for use with the MP40.
3) Usually the MP40 slings are stamped “M.P.38 u. 40” although this is rarely seen due to the oil and filth that is absorbed by the sling over time
Due to the nature of leather and the absorption of oil and filth it is a challenge to indentify the main sling manufacturers. A few of the manufacturers are listed below: