Instruction sheet for handling the machine pistol to prevent jamming

A) Measures before use 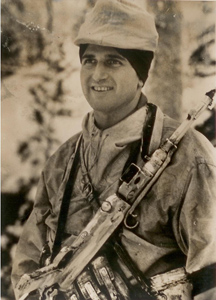 B) Measures during use

8) When placing the magazine in the magazin housing check if you hear a click of the magazine catch
9) To prevent sand and dust from entering the weapon and magazine as well as to make sure the weapon is still ready for instant use, make sure the bolt is in forward position. Also make sure that the magazine is put in the weapon when the bolt in in forward position.
To prevent the bolt from moving backwards in case of a heavy bump a provisional solution in the form of a leather strap has to be used. As seen on the drawing. In order to start shooting, the only thing that needs to be done is to pull the leather strap of the retracting handle and pull the bolt backwards. Pulling back the bolt onto the safety slot is only needed when immediate shooting is not necessary.
10) When the weapon is laid down make sure the magazin is not bumped at the bottom.
11) When holding the weapon, especially when shooting, always hold the weapon under the housing with the left hand at the magazine holder. Grabbing the magazine at the bottom part leads to damage of the magazin. Jamming is the result.
12) During every combat break the MP, the magazine and Magazine pouches need to be examined.
13) Always close the magazine pouch after taking out or putting in a new magazin.

14) The magazine can only be fully filled during the period of combat. The magazin requires special care especially when steel (cuppered) catridges are used to shoot with.

As we can conclude from this instruction sheet the safety strap was developed for two reasons. The first reason being that ever since the introduction of the MP38, the magazine had feeding problems. These feeding problems were caused by sand and dirt entering the weapon through the cartridge ejector port. The second reason was that the weapon could fire accidentally because the bolt was pulled back by accident. Just far enough to load a cartridge but not far enough get caught by the trigger mechanism. The first problem was never really solved. The magazine was the weakest part in the design of the MP38, 40 and 41. They should have sticked to Vollmers earlier design. The same as on the MP34 and MP36 was used. As described on the models pages Hugo Schmeissers influence was so huge that the "Heereswaffen amt" chose Schmeisser's patented design for the magzine/magazine receiver. 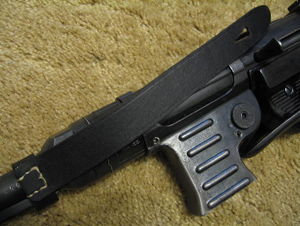 The safety strap was introduced in 1941. As far as I know it was not produced by a factory. The strap was made directly by the leather worker, "waffenmeister" (weapons-specialist) or armourer on a divsion level. There are different versions in material. Sometimes slings of other weapons like the K98 were used to fabricate the protection strap. Basically any material that the tanner could get his hands on. Since it was an official instruction, material could also have been provided especially for it. Apart form the material there are also different versions in shape. I have seen versions with a small buckle as the reproduction one in the picture (with the MP40) and I have seen ones without buckle. The straps without loop must have been attached on the MP by a a "waffenmeister" because I think the front sight guard and front sight holder must have been removed completely. To remove the frontsight holder the barrel needs to be heated because it's soldered to the barrel. 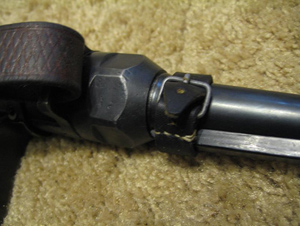 To find an original safety strap these days is very difficult. Most of them were thrown away because a new safety type cocking handle was developed and introduced in 1942 for the MP38 and MP40. As a matter a fact an order was issued on July 25th 1942 stating that all MP38's and MP40's with the old style, one piece, retracting handles were supposed to be replaced by a new two piece safety retracting handle by May 20th 1943. The leather straps became obsolete. Some of the MP38's and MP40's which were assigned to front line units were never modified to the nes bolt handle. These MP's are somewhat rare these days. Apparently not all the early MP38's and MP40's were provided with the strap since so little are still existing. 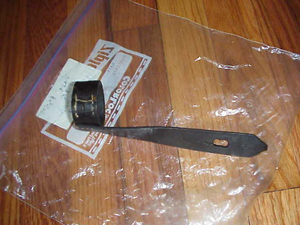 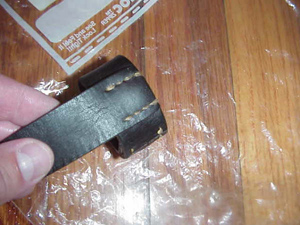 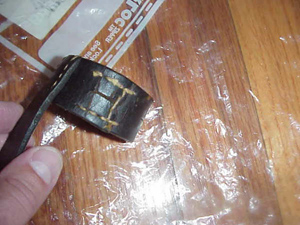 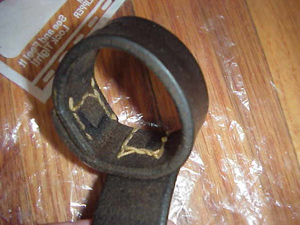 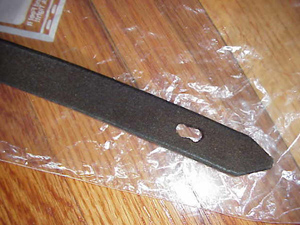 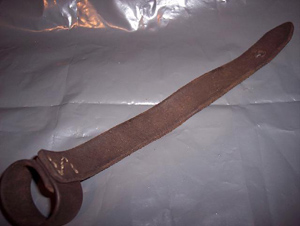