On the 21.st of October 1938 it was announced in the “Allgemeine Heeresmitteilungen” that the tests of newly developed magazine loading tool were completed and that the new magazine loader for the MP38 was going to be introduced. The translation of the announcement is as follows: 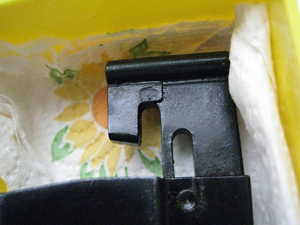 The new magazine loader also appeared in the very first MP38 manual the “Beschreibung der Maschinenpistole 38 (MP38)” (Description of the Machinepistol 38, MP38). This first version of the magazine loader is quite different than the later ones. The metal bar that is pushing the cartridges down into the magazine push is not one piece with the pushdown “button”. In the early version it is welded to the pushdown button. A picture says more than a thousand words see right of this text. This version of the magazine loader is extremely rare because it is my estimation that there are only around a 1000 produced. Why 1000? The estimated production run of MP38 in 1938 is around a 1000. Apart of the different construction the finish is also much smoother than the later produced during the war period. The magazine loader is marked with code 122 which means that Haenel produced this first lot. Haenel was also the sole producer of magazines in 1938 and 1939 so this seems very logical. As described on other pages it was Haenel (Hugo Schmeisser) who was granted the license to produce the magazine initially since Hugo Schmeisser was the keeper of the patent of the feeding system. Erma (Berthold Geipel) could not get around the smart brothers Schmeisser. As of 1940 more factories joined in the production of the magazine loader. The factories that produced the magazine loader are in order of appearance: 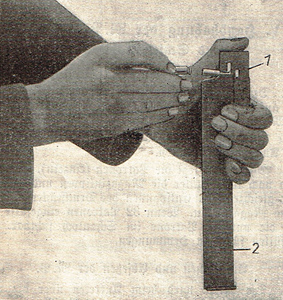 The magazine loader described in the official manuals:

The “Merkblatt” series describes the handling as follows:

The magazine loader is put around the magazine with the back to the left, until it locks; then there magazine in put vertically on a base. The left hand pushes the push button of the loader downward to the stop. The right hand puts the cartridge (single), case head towards the left, under the magazine lips and pushes it to the left into the magazine when at the same time it releases the pressure of the pushbutton. When 32 cartridges are filled, the bottom cartridge becomes visible at a hole at the back of the magazine. Overfilling leads to malfunctions". 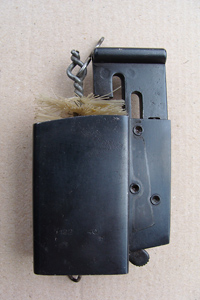 The D167/1 describes the loader as follows:

"The magazine loader will be placed on the upper part of the magazine. In its rear wall are the spring-loaded button at the top and the catch at the bottom"

Below some examples of code stampings on magazine loaders: 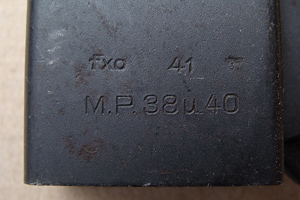 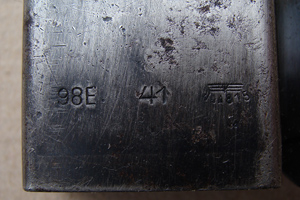 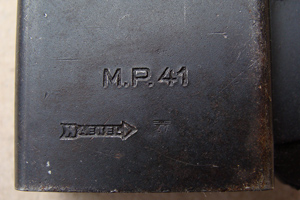 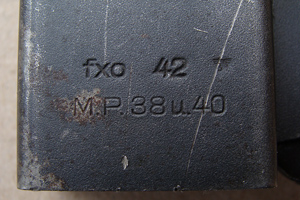 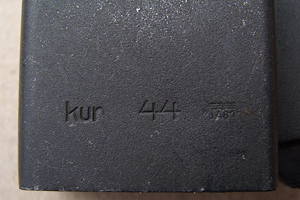 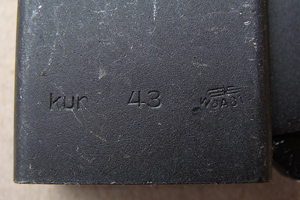 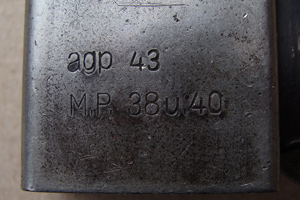 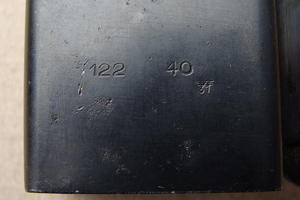 Below an example of the kur 43 magazin loader with turned around stampings: 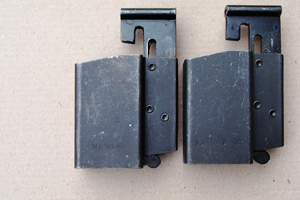 Below the magazin loader divided into it's major sub-parts: 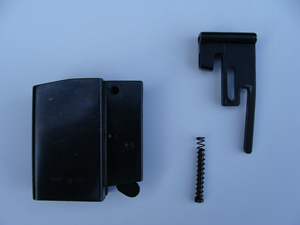 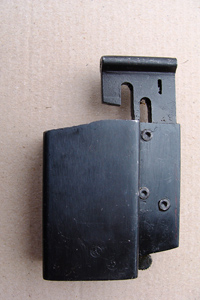 After the surrender of the Wehrmacht in 1945 massive amounts of German firearms were left behind in the once conquered countries. Some countries choose to arm sections of their own armies with the MP40. Norway, Austria, France, Yugoslavia and Bulgaria were countries that took on the MP38 and MP40 in their ranks. Norway and Bulgaria even developed their own loaders. Norway developed the simple and basic “Köningsberg” version and Bulgaria just simply cloned the German magazine loader. The Bulgarian Army actually produced 2 versions. One having a machine pushbutton and one with a punched pushbutton just like the German magazine loader. Currently reproductions of the original are also fabricated and sold online with an “fxo” stamp. For the connoisseur easily to recognize but still tricky in my opinion. During the early fifties the Belgian Company "Precision Liegoise SA" developed the Vigneron Sub-Machine gun. This SMG used almost exactly the same magazine as the one used in the MP40. The Vigneron Magazine does not fit the MP38 and 40. Still the magazine loader for the Vigneron magazine perfectly fits around the original magazine.It's stil being sold and used by MP40 sporting shooters. 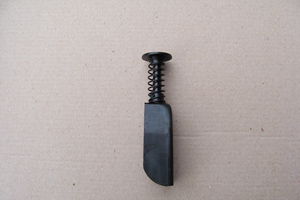 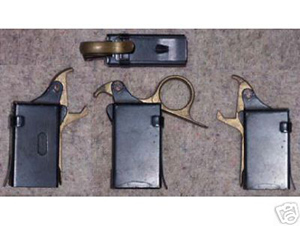 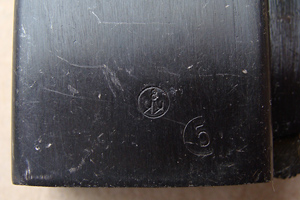 Also within the post-war Bulgarian loader it appears that there are differences. Below you see a picture with 2 different push buttons. One of machined steel and one stamped. 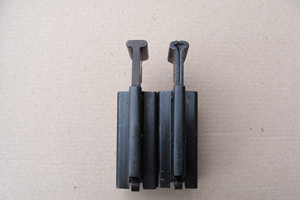