These "accessories" are probably the least known of MP40 collectables. At least they were to me! The main reason for this is that these tools were used by the "Waffenmeister" which means something like "weapons specialist". The Waffenmeister fulfilled a very important job in the Wehrmacht and other parts of the German Army. Together with the armourer he was responsible for inspecting the weapons and make repairs where needed. Apart from inspecting and repairing the Waffenmeister was also reponsible for modifying firearms that were captured from the enemy. For instance; huge amounts of the Russian Ppsh 41 submachineguns were modified for the 9mm round. Also they were capable of making a variety of parts. The Waffenmeister had his own workshop where he could maufacture or repair a variety of parts. However if a weapon needed a complete refurbishment it was sent to the "Heeres Zeug Amt". 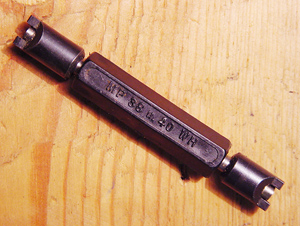 The firing pin gauges were small tools used to measure the length of a MP38 or MP40 firing pin. The measurement had to be done with the telescope spring (with the firing pin on it) inserted into the bold. Just like it it would be in the receiver. The gauge was placed over the end of the firing pin that sticks out of the front of the bold. In this way the correct length was determined. On this page you can see three different measurement tools. Two of them read "Gut" (good) and "Aussch" which is the abbreviation for "Ausschuss" which means something like "no go" or trash . Furthermore two of them read "MP 38 u. 40" 2 of them have the characters "WH" which stand for "Waffen Heeres". Two of them also seem to have some kind of serial Nr. "34 E 20835 b" and "34 E 20835 d". The "34 E" in this combined code stands for "Stoffgebiet" which means something as a catagorie of equipment. For instance; Machineguns carried the code "2", Ammunition "5", Manuals "42", etc. The "20835" stands for the design or type number. The "d" is some sort of following number or serie code. Please let me know if you have more information (info@mp40.nl). Then one gauge shows the word "KNOCH". I would think this is a factory name but here I'm not sure either. It could stand for: Nähmaschinenfabrik Adolf Knoch A.G., Saalfeld (secret code: dvc) 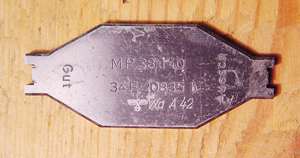 One of the gauges is also fitted with a Waffen Amt code: WaA42. This code relates to the "Waffenmeister" or weapons specialist who was assigned to the following three factories:

The greatest likelihood is that these flat gauges were produced at Lederverarbeitungs-Industrie Walter Krause.

As far as I know there are 3 different firing pin gauges: