After the invasion in Russia it became clear that the magazine, that was developed with minimal tolerances, was not particularly pleased with the Russian dust and dirt. The MP’s collected a lot of dust and dirt when carried around or stored in vehicles. When the MP unexpectedly had to pe put to use and not cleaned properly it would lead to stoppages in the feeding system. Usually the MP fired once and then stopped because the next cartridge would not load properly. Due to this severe problem a lot of casualties were reported.

During the design and development of the magazine the extreme friction caused by a mix of very tiny dirt particles and evaporated weapon oil was not taken into account. The arms industry had to come up with an urgent solution. One solution was the dented or ribbed magazines as introduced from 1941. The dust and dirt could easier escape through these “canals”. The second solution was the development of a magazine cleaning brush.

On the 21st of August 1942 an announcement was made in the 695th “Allgemeine Heeres-mitteilungen” concerning the countermeasures that needed to be taken against obstructions of the MP38 and MP40 in general.

1) The installment of a safety retracting handle.
2) The introduction of a magazine brush
3) The adaption of the magazine

This page concerns the magazine brush so the translation of the announcement for part 2 is as follows: 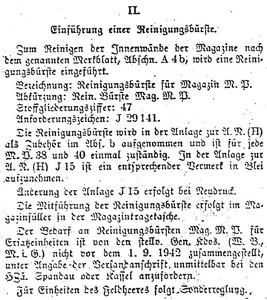 In order to clean the inside of the magazine according to the before mentioned manual, section A 4 b; a cleaning brush is introduced.

The cleaning brush will be included in the section H.R. (H) as equipment and is applicable for each M.P.38 and 40. In the section H.R. (H)  J 15 a note has to be incorporated.
Change of section J 15 will follow in the republication.
The carrying of the magazine brush will be stored in the magazine loader in the magazine pouch.
The demand for cleaning brushes Mag. M.P. for Army service corps is not available before 1-9-1942. With the specification of the delivery address request can  immediately be made to the HZa. in Spandau or Kassel. For units of the field army a special arrangement will follow.

As from the 21st of August 1942 the cleaning brush for the magazine of the MP38 and MP40 was originally registered with “Gerät Nummer” 2902 (Equipment number). With the introduction and of the new D 97/1 Gerätliste (Equipment list) of 1-7-1943 which replaced the one from 1939 the cleaning brush received a new number; 1031.

The magazine cleaning brush for the MP38 and MP40 was also included in the official D167/2 “Einzelteile” (part list) manual (part nr. 115) and the “Unterrichtstafel” (instruction table) UT 112.

Regarding the use of the cleaning magazine brush the translation of description in the D167/1 Manual is as follows: 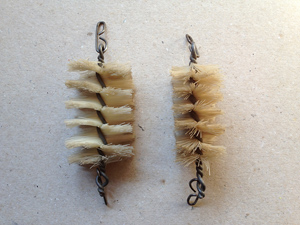 This last sentence in this section is in fact a very remarkable note; it was strongly suggested in an official print NOT to oil the magazine as this could lead to stoppages.

The shape of the brush is not round as one would expect. The dimensions are rectangular and have the same measurements as the MP38 and MP40 Magazine. Length of the entire brush is about 9 cm.

The cleaning brush for the MP38 and MP40 magazine is nowadays an extremely rare accessory.  Unfortunately I have never been able to uncover the factory that produced these brushes as the brush is not coded in any way. If you have more information regarding this cleaning brush please email me at info@mp40.nl 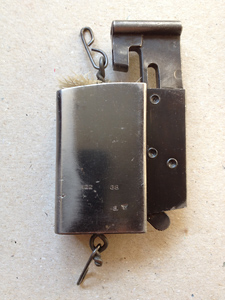 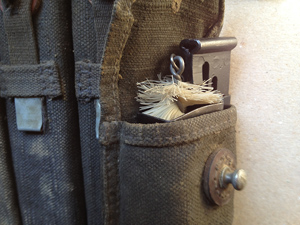