Basically there are 6 types of magazines: 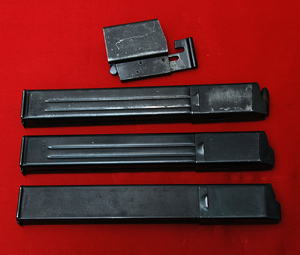 On March the 23th 1942 Directive LVIB went out stating that all new magazines should have ribs. These magazines were called the B magazine. The slabsided were the 0 type and the afterribbed the A type. Main reason for ribbing magazines was that the earlier type 0 magazines were affected too much by dirt. All the  A type  magazines were afterribbed by Haenel using the WaA387 Waffen Ambt code. You can easily recognise a A from a B type because the ribs of a afteribbed A type start right under the reinforcement. The followers in a B type are also different then a A or 0 type magazine.Right below you find a listing of all possible magazines and their Factory and WaA codes: (Source: Claus Espeholts G43 Collectors site claus.espeholt.dk/mediearkiv/mag40_c.pdf)