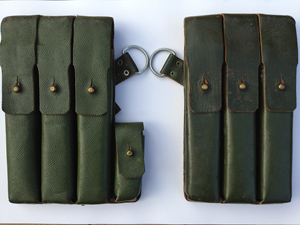 A Norwegian MP40 pouch set (front)
During the last months of the war and right after the general surrender of the German occupying forces in May 1945 large quantities of firearms had to be submitted to the allies. Some countries choose to be supplied with redundant firearms of the Allied forces while other countries decide to arm their forces partially or fully with firearms that were used by the German armed forces. For example Norway and Austria fully implemented former German small arms while countries like France, Bulgaria and Yugoslavia partially implemented German small arms with their armed forces. 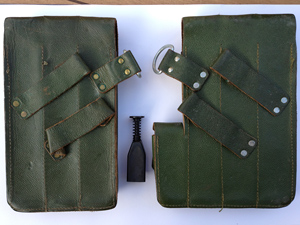 A Norwegian MP40 pouch set (back) including the Norwegain magazin loader

Apart from using the captured items, Norway also produced several accessories to the MP38 and  MP40. Apart from a magazine loader, a blank firing device and a manual the Norwegian also made their own leather magazine pouches.

The design of these pouches was more or less the same as their German predecessors so basically a set of 2 pouches that had to be connected to the soldier’s belt and Y-sling. A left pouch with 3 magazine pockets and a fourth smaller pocket for the by the Norwegians self developed magazine loader. A right pouch which consisted out of 3 pockets. 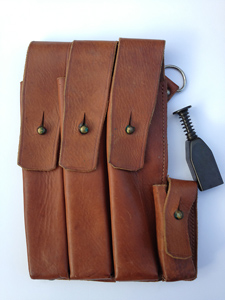 The Norwegians developed two types of pouch sets both in different colors. Apparently well camouflaged soldiers were not an important issue as one type had an almost orange leather color and the other one a light green color. The different types are not only recognizable by their color. There is also a clear difference in the D-Ring and the “staples”.
Unfortunately I have not been able to identify any production markings or stamps on these pouches. If you have any further information to which company made these pouches please let me know. info@mp40.nl

The Austrian Bundesheer kept the arsenal of small arms they were already equipped with since World War II including their sub machine guns. Inititally the Bundesheer had also enough accessories to these small arms from the Third Reich period. The first “Panzertruppe” MP40 manual from 1956, issued a year after Austria’s declaration of Neutrality in 1955, shows pictures with comments that refer to standard German MP38 and MP40 equipment.  The manual from 1955 however also informs the reader of a magazine loader and a blank firing device that were not mentioned anymore in the manual of October 1969. 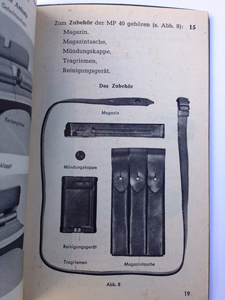 This paragraph (below left) explains briefly the MP40 pouches. The text is taken from the Austrian "Panzertruppe" manual from August 1956. The tekst still refers to the Original German pouches since it mentions the pouch for the magazine loader. This small pouch is not present on the later Austrian pouch. 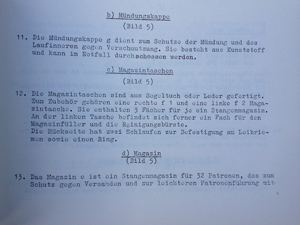 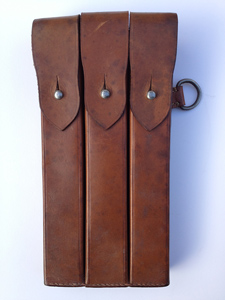 The only known accessories that were produced in the post war period in Austria were the carrying sling produced by Stolla Wien, 2 different manuals (1956 and 1969) and a magazine pouch. Contrary to the Norwegian and the original German couple/set of pouches the Austrian Bundesheer issued only one pouch per soldier.
The Austrian pouch was also made of leather. It was produced in two colors black and brown. Also a mixture of both brown (back) and black (front) are known to exist. The Austrian pouch was produced by the well know firm Stolla Wien. This factory also produced the MP40 sling and other leather equipment during the World War II. The factory used the secret production code “cgu” during this time period.  The Austrian MP40 pouch is a very well made, rugged, leather pouch. Instead of using small straps sewed to the flaps, like the original German pouches, the Austrian design uses the flaps itself to lock to the “buttons”. The D rings used on the Austrian pouches are similar to the original German D rings. Probably these rings are the remaining of Stolla’s World War II production.
These days the Austrian pouch is often sold as “original” which it is but not World War 2. Many pouches have Waffenamt stamps (mainly WaA866) eagles and swastikas on them but these are fakes.

Please let me know if you have additional information or photos with regard to the post war MP38 and MP40 pouches. info@mp40.nl 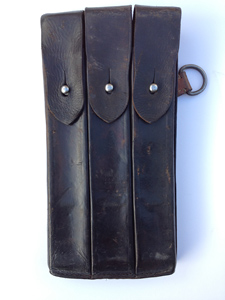 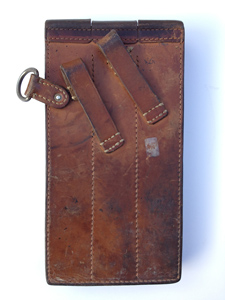 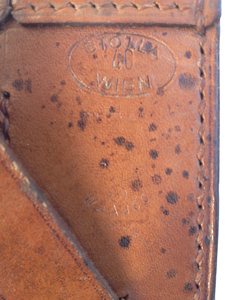 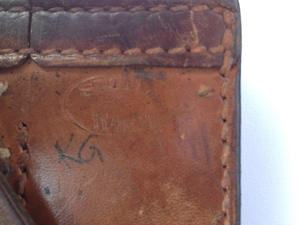